Embryo swims from one uterus to the other! Publication of a scientific paper on the embryonic behavior of a captive tawny nurse shark

Similar to mammals, the offspring of some sharks grow in the maternal body. However, the mechanism underlying this phenomenon remains largely unknown. Particularly, the embryonic behavior of sharks within the uterus is hardly investigated.

The research group at Okinawa Churashima Foundation used the newly developed “underwater ultrasound” to observe the embryonic behavior of the tawny nurse shark inside the mother.

Our observation showed that the embryo is an active swimmer that sometimes migrates between the right and left uterus (unlike humans who have a single uterus, sharks have two uteri). Such highly active embryonic behavior has never been observed in live-bearing vertebrates.

Tawny nurse sharks have an unusual reproductive system. The embryo grows to a large size in the mother by feeding on sibling eggs. The high swimming ability of the embryo is possibly an adaptation for effectively searching these eggs. 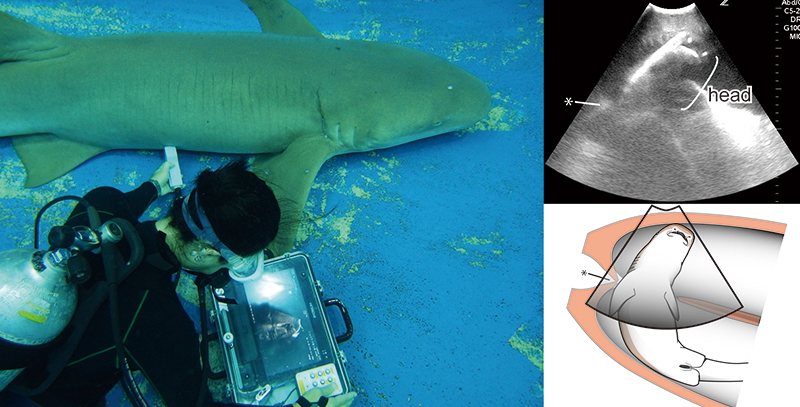 Locomotion is not a privilege after birth: Ultrasound images of viviparous shark embryos swimming from one uterus to the other